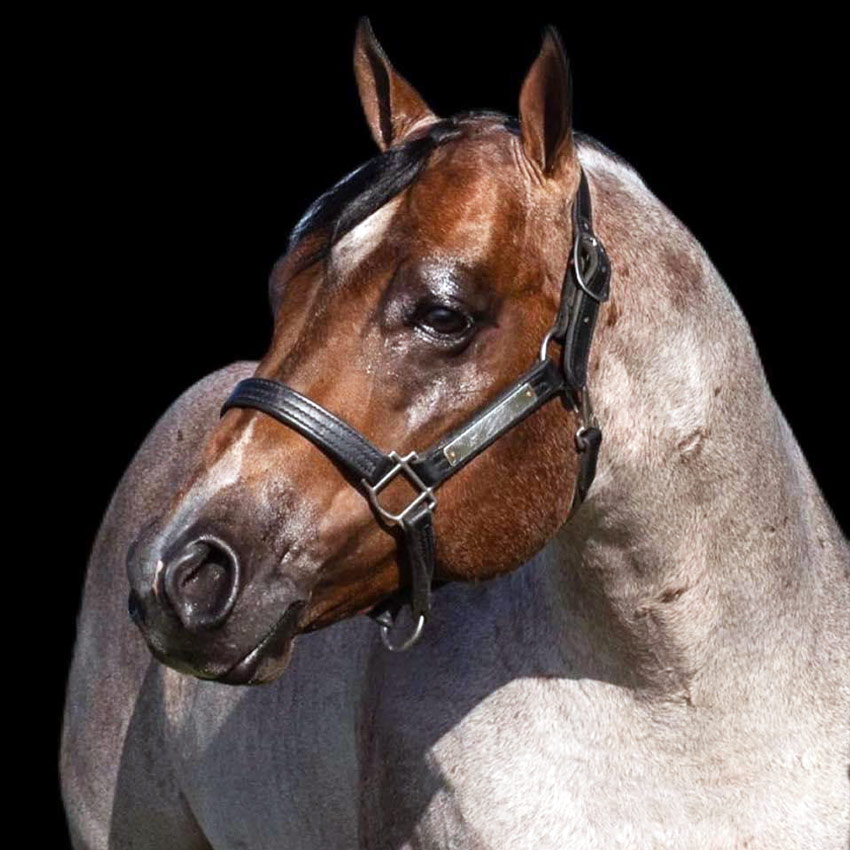 We are very excited to share the news that 5x World Champion Stallion Vs Goodall In Blue has been sold to Cindy McCraw. The stallion has been shown and loved dearly by previous owner Kristy Goodall.

"I just know. This move for him as a sire is 100% in his best interest and she has the ability and knowledge and resources to take him to his full potential in this next step of his life", shared a tearful Kristy Goodall. "This was not a decision that was taken lightly nor without a tremendous about of emotion attached to it", Kristy continued. "Harley has made me hands down a better horsewoman. He has taken me places that as a little girl I dreamed of as I poured over tattered Quarter Horse Journals, dreaming and hoping someday that could be me. He came to us a weanling we hoped would make stallion for us and he will leave us a 5x World Champion."

"Our walk through the Gateway of Champions with a globe in our arms was the cumulation of decades of dreams coming true. I'm not sure I'll ever own another animal as beautiful and amazing as he is. He is the epitome of a 'heart' horse." "This next step is what I feel in my heart is right for Harley to make him into the great sire I am sure he is destined to be and Cindy will give him that opportunity for this next phase in his life so with with tears in my eyes but so much anticipation and excitement for this next step, I am handing the reins to Cindy."

"My heart just fluttered when Kristy told me that Harley was her best friend", shared Cindy. "This big 15.3 hand hunk of stallion took care of her in the show pen especially when she needed it. The two of them together accomplished more than any non pro amateur could ever hope for. Harley became a Five Time World Champion to include titles in western pleasure, trail, english events, halter and lunge line in multiple breed associations. Vs Goodall In Blue also accumulated over 170 AQHA points with 127.5 performance points, and 43 halter points both in open and amateur competition." 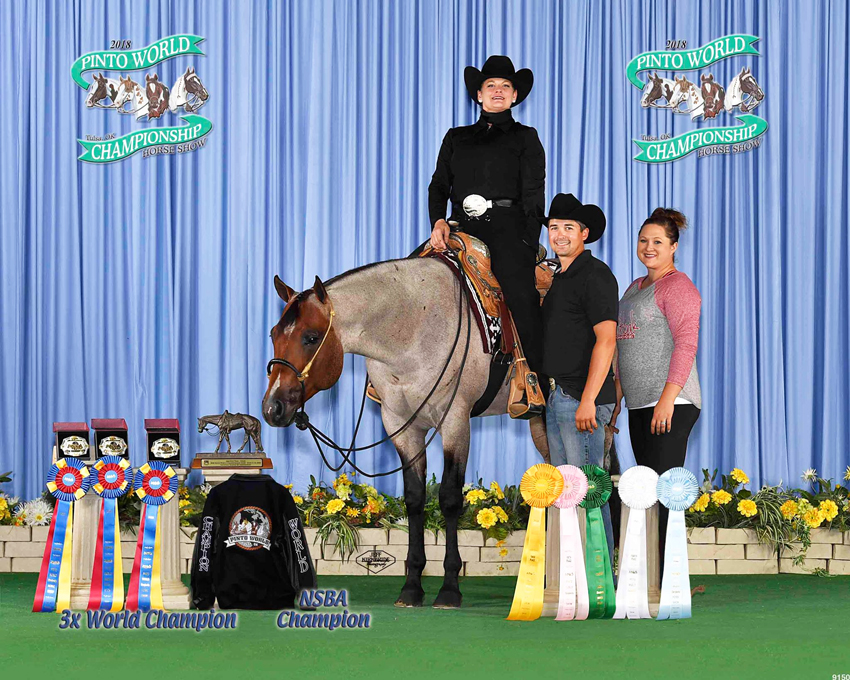 VS Goodall In Blue is a 2015 Bay Roan AQHA Stallion by VS Code Blue and out of ShezHotForChocolate, by Chips Hot Chocolate, out of a Radical Rodder mare. He stands 15.3h tall, and is 7 panel negative. "Harley" has proven himself in the pen as a 5X World Champion, a Reserve World Champion, and an AQHA and NSBA Champion. Cindy is so grateful to Kristy for allowing Harley into her life and promises her "that she is still the mom, and she will take the aunty spot."

"I have had a knowing in my heart and burning desire over the past few years for something big in my life to happen and so it did! The universe is mysterious and listens", exclaimed Cindy. "I was actually surfing around on the internet at a different stallion that I was inquiring about. Being still so in love with my first stallion, the late great Dynamic Deluxe I caught notice of someone mentioning a DD mare so I side tracked off and followed and ended up on Harley's page. Thank you DD!" "I have known Kristy and Dean Goodall for many years and as customers they bred to and also loved the lines of Dynamic Deluxe, so the history and background of knowing what kind, and honest people they are made it easy for me to send a simple one line question, "would you price your stallion to me?." With as much as Kristy loves Harley I truly believe that had it not been me, with our history, he would have never left her sight. Her love for Harley clearly shows up just in the willingness to let him go to become the best breeding stallion he can become." 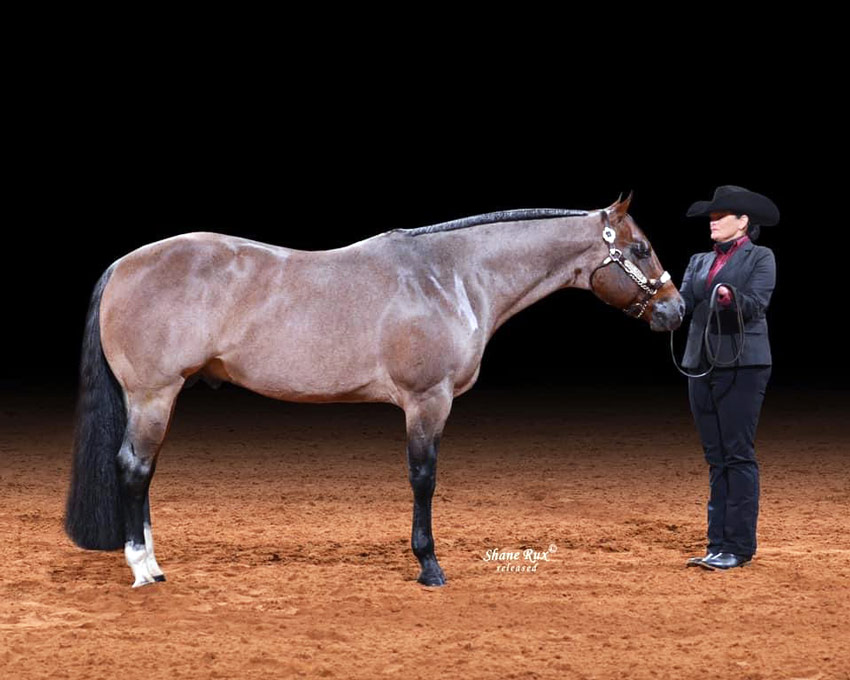 "What a stallion and what a mind! Then I took notice of the incredible conformation that the babies from his first foal crop had and was very taken back how they all had his stamp. What really put me over the top and concreted my decision was when Kristy sent me two little video clips. As silly as it sounds the first video was a little girl whose feet would not even reach the stirrups, in only a halter and lead rope cracking off into the lope with an effortless lead change. Just blew my mind thinking this horse is no ordinary stallion. The second video clip was a young man leaving Harley to stand alone, goes way back behind him and takes off for his hip at a run and butt jumps onto his back and gives him all sorts of stud muffin scratches all the while Harley does not move an inch. This stallion's mind is unreal and I hear the babies are people lovers and trainable as well."

"Harley was originally purchased by Kristy and Dean as a weanling from Bruce and Stacey Bebo of Redfield, South Dakota. The Bebo's own and run a quarter horse breeding facility with several of their own stallions and mares. In 2014, they encountered a tragic barn fire and lost several of their stallions. Being primarily a breeding facility, Bruce and Stacey relied on their stallions, foal crops, and sales for income. In a time of need, several of the top stallion owners in the industry donated breedings to them so they were able to continue breeding their mares and produce income for the future after such a tragic loss. VS Code Blue was one of the donating stallions, and they chose to breed him to their mare, ShezHotForChocolate, producing a beautiful bay roan stud colt."

Owning Harley seems to be Kismet for Cindy. The story of how he was named shows a connection long before owning him became a reality. When Kristy and Dean were looking at purchasing the young colt, Dean had just sold his Harley Davidson motorcycle and was itching for a new one. Kristy sent Dean down to pick up their new colt in South Dakota, and upon arriving home, she jokingly told him that this was his new Harley, referring to the budget for the motorcycle taking a hit, but little did she realize that would end up sticking as his name!

Meanwhile, Cindy's husband Donnie is a passionate Harley Davidson owner and Cindy wanted to support his passion. Donnie purchased Cindy a bike of her own and her first outing "was not without laying it down." It was decided that Cindy needed training wheels, so after a long search the Harley trike was located in Missouri, so just like a horse the haul was scheduled ironically, the bike's name was "Hot Rod Harley". Both Harleys will be arriving home to Riverside Ranch in mid December.

When Cindy put her homework into the breeding integrity of the stallion, she found out that Rick McDonald was the breeding manager that trained Harley to the phantom and did all of the initial reproductive testing on Harley. Cindy and Rick both were some of the first breeders back when shipped cooled semen initiated with AQHA. Over the years Cindy relied on Rick for cutting edge breeding techniques and he was always willing to share. Cindy shared that she felt Rick was "one of the guru's of the equine reproductive world." Rick gave Harley rave reviews not only on the quality, longevity, and motility of his semen but also told Cindy that he was extremely happy for her as he felt this was a very special animal. Rick's last comment before hanging up the phone was "Cindy, I couldn't kill his semen with a hammer!" 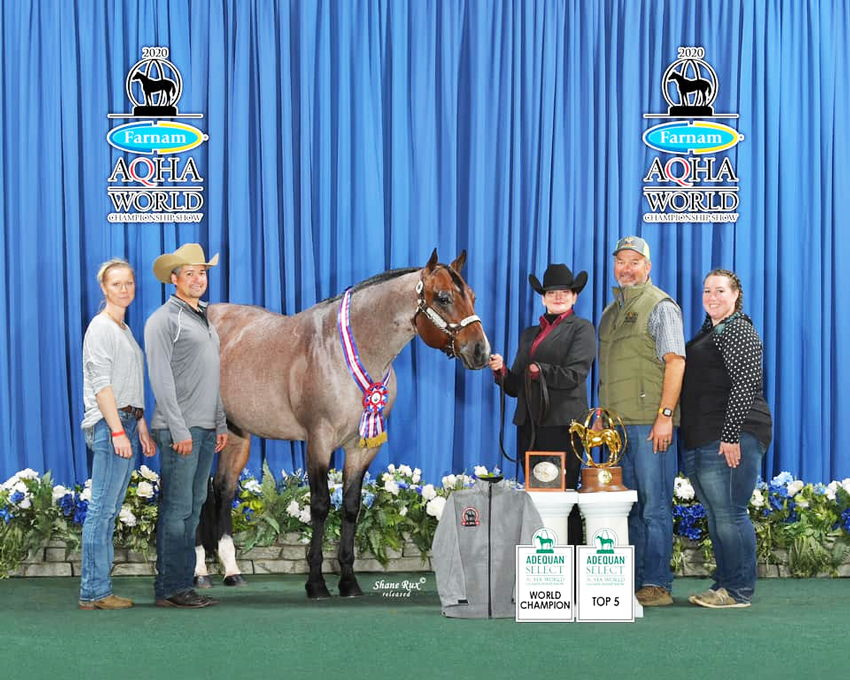 "Thank you for all who trusted us, believed in our dream and supported us on this journey", shared Kristy. "None of this could have been possible without Bruce Bebo of Redfield, SD breeding such an incredible animal, my trainers, Amanda Knudra, Scott Neuman who gave him the foundation, and Rylan Sundsbak who made him the "handicapped-accessible-stallion" we called him (me being born with only one hand) rock solid show horse he is, Rick McDonald as well as Ashley Bona, our stallion managers who led me down the path of making him a breeding stallion and taught me SO much and the incredible support of my husband Dean, who brought this baby home sight unseen to me."

VS Goodall In Blue, will be standing amongst the great stallions, Machine Made and Mightty Mouse making home at Riverside Ranch, the facility that stood Dynamic Deluxe and raised Dynamic In The Dark, My Final Notice, and several other notable show horses.

Cindy works alongside her very respected long time friend Dana Eddy. She is very well known for her wonderful customer service and knowledge of the industry. A complete family owned stallion station, you will also find Cindy's husband keeping the mini ranch in order as well as Cindy and Dana's mothers Solveig and Cherie helping in the lab. "We do not just stand a stallion here at Riverside Ranch, we love them."

Harley's 2022 stallion service fee will remain at $950. With special prices given to show and produce record mares. Come Join the "Harley team" Be sure to follow VS Goodall In Blue on Facebook or for more information call 817-304-0800